The TroutHouse has greatly enhanced the visitor experience at Trout Camp.  It invites campers and non-campers alike to a luxurious experience while maintaining its mission of immersion in nature to advocate for the preservation and restoration of our rivers and watersheds.

The TroutHouse is the set piece of the Shasta Springs Trout Camp.  Trout Camp is the conservation think tank of CalTrout, who solve complex water resource issues in California for the benefit of fish, and people.  Trout Camp is set on 38 acres of private land on the Upper Sacramento River, where its guests live an outdoor lifestyle in complete physical immersion in nature.  Small sleeping cabins are delicately arrayed in a north south axis while the TroutHouse is the western endcap to the outdoor kitchen living room on the east west axis.

Eight log columns support log entablatures and pediments which were painstakingly scoured and fit together with hidden structural hardware.  The project was an intense collaboration of the client, the builders, the engineer, and the architect.  Every detail, log, and method was discussed at length with the team.  The high level of craft resulted from the collaboration and the shared belief that we were building something special in a sacred place.

The trees that were used for the construction were scheduled to be removed to comply with CalFire requirements.  Bark was stripped onsite in the winter when the sap was frozen and the logs were placed on sleepers to dry for a year.  Flat basalt stones at the entrance were sourced during the road construction.  Large andesite viewing rocks that were pitched out of an eruption of Mt. Shasta over two centuries ago, are followed by the entrance path and worked into the deck design.  In the center of six of the columns is an open cedar cask, which houses an accessible toilet and sink entered by a curved door at its axial entrance.  Beyond the cask and between its columns on the western entrance is the shower, which flows from the kingpost between the two columns.  Here the deck rotates at a 45-degree angle and has two privacy walls which block views to the shower, while creating an open view of the forest for the showered.  Two cut logs provide seating and alert of a grade change at the open end of the shower area.  The Trout House is fed by onsite spring water and illuminated by indirect LED lighting. 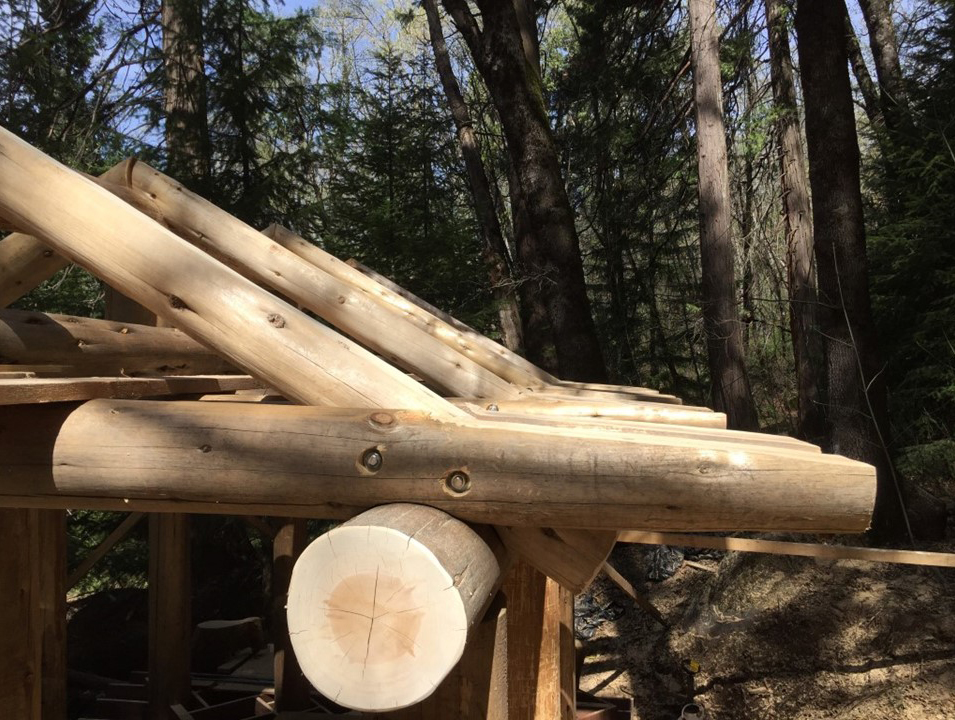